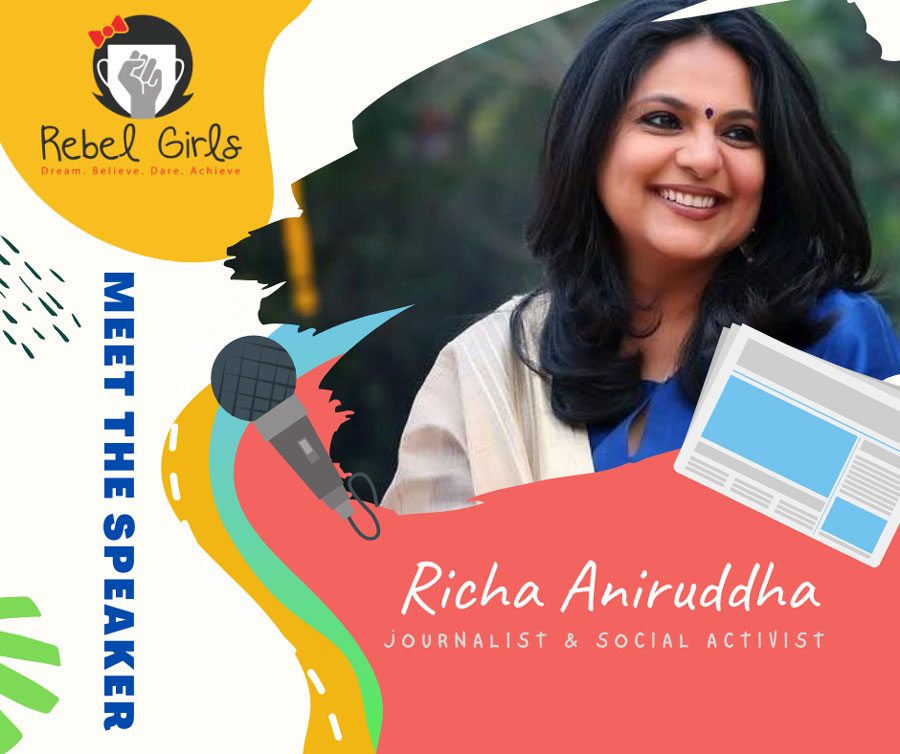 On November 12, 2017, for the first session of Rebel Girls Interactions, the children interacted with Richa Aniruddha, who did a great job of engaging and inspiring the kids.

She is an Indian Talk Show Host, who has been in News Industry since 2002. She focused on real human stories, and how to leverage various mediums to champion relevant social issues like Student Suicides, Female Foeticide, Child Sexual Abuse, Mental Healthcare, etc.

Ms Richa Anirudh- a Journalist, is a well known face of Hindi television. She is best known for hosting the talk show ‘Zindagi Live’ previously on IBN7, then on ETV Network which won the Best Talk show award in all its 6 seasons. Zindagi Live was a powerhouse of emotions and raised many burning social issues.

Presently she is hosting a show called “Betiyan” on India News where she interviews women achievers who have braved odds, fought the system, broken the glass ceilings and fulfilled their dreams.

For last 2 years, Richa has been an RJ on 92.7 BIG FM. Through her breakfast show “Dilli Meri Jaan” she used to highlight the civic and social issues of Delhi. Presently she presents a show called Big Heroes where she interviews unsung heroes of the society.

She is also the Editor in Chief and publisher of School LIVE magazine, an exclusive monthly magazine for the school community. This magazine encourages teenage students to express themselves through reviews, blogs, poems, stories. This is a magazine by the students for the students.

Richa appeared as the Expert Advisor on 4 seasons of the much acclaimed TV Quiz show “Kaun Banega Crorepati” hosted by superstar Amitabh Bachchan.

In 2012, she was selected for U.K. Govt ‘s prestigious CHEVENING GURUKUL SCHOLARSHIP. which is offered to Only 12 Indians every year.